In compaction processes, the primary goal is to increase the bulk density of powders and solids. In particular, small, fine particles are connected by compression to larger particles. It may also be the goal that high air fractions should be removed from the bulk materials, so that lower volumes can be generated at the end. Pure compaction processes are used primarily in the chemical industry. Depending on the nature of the starting material of the compaction is still followed by a crushing or milling process. Thereby, the compacted, but partly coarse agglomerates (flakes, ribbons, needles) are to be divided into smaller particles with a certain particle size distribution (PSD). 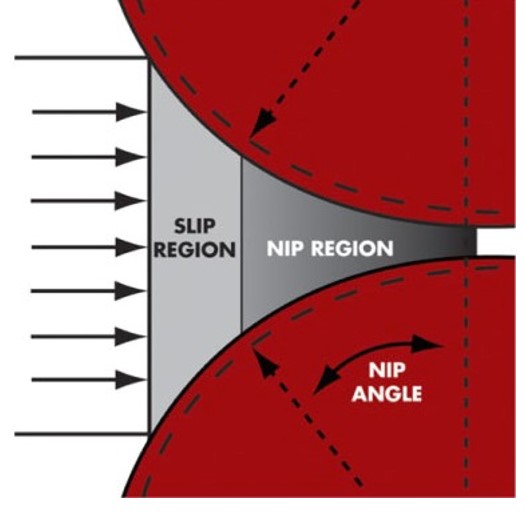 Figure 1: The main regions of the compaction zone in roller compaction

Compacting with roller presses is a highly efficient way of compacting bulk materials. The starting material is compacted in the roller compaction via two counter-rotating rollers. A special case of compacting is briquetting. Here, the roller surfaces are provided with pockets, so that the briquettes are formed during pressing.

Depending on the plastic deformability of the starting material, endless flakes, but also fine needle agglomerates, are produced by pressing. Needle agglomerates are e.g. generated during the compaction of silicates. The slugs are comminuted in the following crushing process granules desired shape. This results in bulk materials with higher densities (lower volume), better flow and dosing properties and certain particle size distributions (PSD).

Alexanderwerk roller compactors are used in compacting (and granulation) processes in the following applications:

Granulation is mainly used in pharmaceutical or similar applications. During granulation, fine, poorly flowing powders, and the agglomeration of particles, produce larger particles called granulates. The main aim of granulation in pharmacy is to achieve good meterability of the bulk material, since the active ingredients (APIs) in the non-granulated state are difficult to compress into tablets in the subsequent process step (tableting). In principle, two different processes for the production of granules can be used.

In so-called wet granulation, binders are added in liquid form to the powders. The binder, usually based on water or alcohol, acts as an adhesive, so that individual particles are connected to each other via the liquid bridges. Wet granulation also requires a downstream drying process to reduce the moisture in the granules. Both the addition of binders and the drying process can have a negative impact on the quality of the granules and the active ingredients.

In dry granulation, granules of the desired quality (density, particle size distribution, porosity) are generated by compacting and subsequent comminution. An addition of binders with subsequent drying process is not required here. Basically, two methods are common:

In so-called slugging, large tablets are pressed from the starting material. These are then crushed using mills. The huge disadvantage of slugging is above all the non-continuous process, as well as the uneven compression of the poor, flowable starting material. This is also reflected in the final granules, as slugged granules are characterized by an unstable and difficult-to-control quality. Slugging is no longer regarded as “state-of-the-art” and therefore rarely used.

Roller compaction has become very important in recent years. It produces stable granules by continuously compressing powders between two counter-rotating rollers. The agglomerates, also called flakes or ribbons, are then comminuted via a downstream comminution unit into well-flowing and easy-to-dose granules. Among other things, Alexanderwerk roller presses of the WP series are characterized by their particularly gentle comminution. Furthermore, the compression process is unique, as the vertically arranged rollers, in conjunction with a special control logic, continuously produce slugs of consistent thickness and density, which is essential for a consistent granule quality. 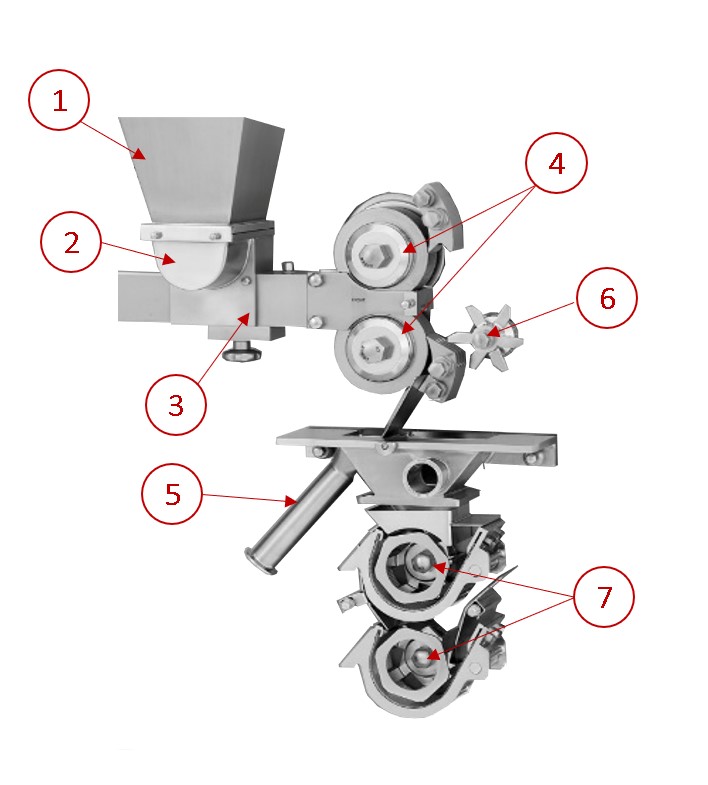 Why does Alexanderwerk create the highest quality granules?

Alexanderwerk roller compactors produce the highest quality of granules compared to all other roller compactors. This is mainly because Alexanderwerk has optimized the entire compaction and granulation process. The quality of the process starts already with the correct intake of raw material in the hopper. An optimized design ensures a good supply of material and prevents caking and clogging. The integrated stirrer prevents clumping in the feed area of ​​the auger and ensures good material handling. The patented Combi-Vent feeder increases throughput and also contributes to a uniform mixing of raw and return material. The vertical arrangement of the rollers, in combination with the unique nip control, ensures uniform density and bucket volume. The unique control concept makes it possible to operate the nip with an accuracy of +/- 0.1 mm. As a result, the slugs have a uniform thickness. Also, the material supply is controlled continuously, so that at constant roller pressure, there can be no fluctuations in the density. Last but not least, the 3-stage shredding process guarantees the gentlest shredding compared to all other competitors. Basically, Alexanderwerk roller presses generate a much lower proportion of fines than all other roller compactors.

Alexanderwerk explains the theory of roller compaction. Get insights from the global leader of dry granulation and compaction and get in contact with our team and partners.